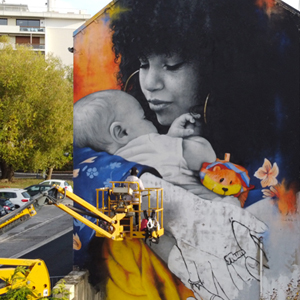 “I took part in the 6th edition of ‘Ceci N’est Pas Un Tag’, a street art festival taking place in Saint-Quentin, France. I painted a mural of a young mother tenderly holding her newborn baby. My models for this project were singer Eva Lazarus with her son Kobe. There are a lot of small details in this artwork: from Eva’s beautiful curls to the toy, or the patterns on her clothes.

Thanks to the city of Saint-Quentin for organising this project, as well as Flore, Maria and Françoise for helping me on site.” 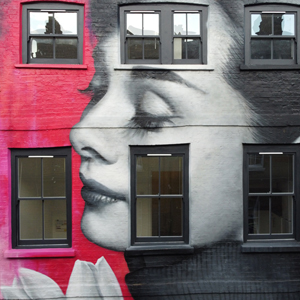 “To plant a garden is to believe in tomorrow.” Audrey Hepburn

“Earlier this summer, I painted a portrait of the iconic British actress and humanitarian Audrey Hepburn in Brick Lane, London. While the building was being renovated, the owner gave me carte blanche to beautify it, and the artwork has only been unveiled recently after the scaffolding tower was taken down.

The portrait is inspired by an amazing photograph taken by Yousuf Karsh in 1960. The artwork depicts Audrey Hepburn looking down, peaceful with a hint of nostalgia, while holding a few tulips. Years ago, a white hybrid variety of the flower was developed in Holland, and its creators named it after the iconic beauty.” 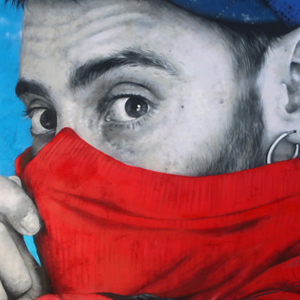 The small village of Penelles in Spain is a beautiful and surprising outdoor gallery, now filled with more than 100 murals (for 400 inhabitants!). The organisers of Gargar Festival invited me to take part in this year’s edition, which took place with less artists over a few weeks in August.

I painted a portrait of my friend and artist Bifido, who did some paste-ups at the festival a few years ago. The artwork depicts him wearing his traditional street art gear (hat, bag with paper and red jumper) and in full action: he’s pasting up a collage of a blue sky on the wall while looking nervously over his shoulder. Sometimes, you gotta be quick!